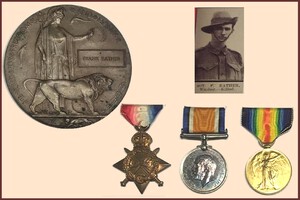 Frank Eather from Liverpool, New South Wales, enlisted on the 3rd of November 1914 and embarked for Gallipoli on the 11th of February 1915 as part of the 2nd Reinforcements for the 1st Battalion. Eather served with ‘A’ Company, 1st Battalion, at Gallipoli, being taken on strength on the 7th of May 1915. He was promoted to L/SGT on the 20th of June 1915, and served as a Platoon Sergeant.

After the Campaign at Gallipoli and a brief period of sickness, Eather joined the B.E.F. in France on the 23rd of December 1916.

During the Battle of Bullecourt he was initially reported as being “Missing in Action”, this was later changed to “Killed in Action” between the 5th and 8th of May 1917.

Eye witness reports state: “He was going up with the Platoon from the support to the firing line when a shell struck the rear of the Platoon. It killed him and others and nothing was seen again of any of them, nothing remained.”

“SGT. Eather and some of his Platoon were killed by a chance shell in communications trench and were all buried by the shell and ‘blown to pieces’; though we searched for them we could find no remains”.