Half Penny Collection in Dansco Album complete except 1923 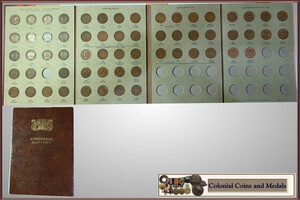 and is a near complete date range set, only missing the 1923 Half Penny.

The coins are all average to better than average selections, and follow typical conditions of their associated monarchs;

half pennies of King George V have a darker tone as they are the oldest of the Australian Pre-Decimal date range,

their original mint luster. Examples of each monarch’s Obverse are also included.

The Album is a Dansco Deluxe push-in and is in average condition with wear marks on the outer surface.