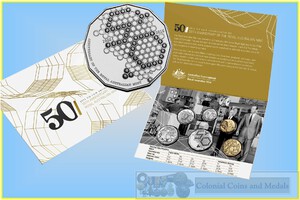 On 22 February 1965, the Royal Australian Mint was opened by His Royal Highness Prince Philip, The Duke of Edinburgh. The Mint’s great task was to produce Australia’s circulating coins for the changeover to decimal currency in 1966. Fifty years and fourteen and a half billion coins later, these pieces of superb art and engineering are still cherished.

This celebratory set features a modern 50c coin design with its signature dodecagon shape arranged into a ‘honeycomb’ design, symbolising the industrious hive of the Royal Australian Mint