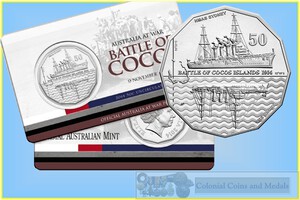 As Australia commemorates a centenary of Anzac service, the Royal Australian Mint’s Australia at War series remembers the Battle of Cocos Islands. A century later, this battle is still being remembered as Australia’s first naval victory.

A bravely-fought conflict that was close to our homes and close to our hearts.Whilst forcing the Emden to be grounded on the North Keeling Island Reef, 134 German crewmen were killed in the battle. However, it was much more noteworthy that the wounded German prisoners sang resounding praises of the Australians who treated them. The white, red and blue coloured stripes featured on the packaging are representative of the ribbon colours on the medal given out during this time.