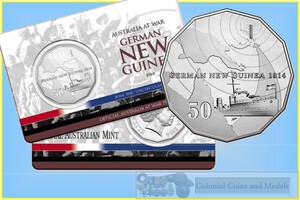 As a poignant reminder of the struggles faced during the First World War, the Australia at War series commemorates those who contended with the German colony of New Guinea. This conflict marks the earliest example of unity among Australian volunteers – and the first Australian lives to be claimed by the War.

When war was declared in August 1914, Australians sprung to action to fight for the cause. One early order of business was to counter the German colony of New Guinea. Within weeks, volunteers rose to the challenge and successfully formed the Australian Naval and Military Expeditionary Force, which occupied the township of Rabaul on 11 September. The coloured stripes featured on the packaging are representative of the ribbon colours on the medal given out during this time.