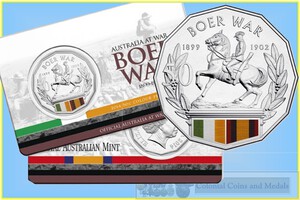 As a testimony to colonial Australians’ loyalty to the British motherland, the Royal Australian Mint presents this tribute to those who served in the Boer War, defending the lives and honour of British subjects in South Africa. As a symbol of history, commitment, tradition and pride, this coin is a welcome addition to the Australia at War series.

Australia supported the British counter-offensive from 1900-1902, seizing major Boer towns, and forcing the Boers into small pockets of resistance. Overwhelmingly, Boer guerrillas were outnumbered and conquered by Australian troops. The coloured stripes featured on the packaging and coin are representative of the ribbon colours on the medal given out during this time