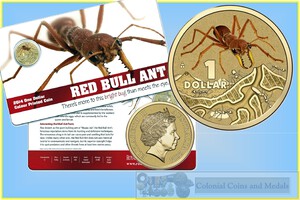 The Red Bull Ant is believed to be dwelling in elaborate underground nests with two or three guard ants serving as loyal bouncers. This ant is alleged to be the ringleader of a ruthless food network: extracting liquids from bees and other ants, and feeding the leftovers to its larvae. Witnesses report that the worker ants’ own infertile eggs have also supplemented this diet. Be on the lookout for its bright yellow mandibles and reddish-brown head and thorax.

If seen, the Red Bull Ant should be considered venomous; one sting from its tail can result in three days of pain and swelling. For those too wise to try to capture one alive, capture one in coin form as part of the Royal Australian Mint’s Bright Bugs series, this is the last coin in the Series