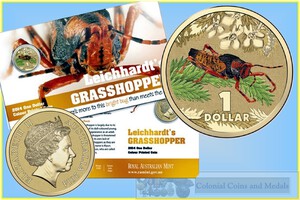 This coin is the fifth coin in the Bright Bug Series. Hatched in the remote plains of the Northern Territory and Western Australia with dull colouring, the Leichhardt’s Grasshopper might never seem destined to take on the world. However, as it grows and develops a vivid body of brick red, midnight black, orange and royal blue, it soon finds its purpose, its home and its mission. The whole world might still be too much for it to conquer, but it does manage to pounce on a single Pityrodia shrub. It lives in and eats its one host plant for its entire life.

While the grasshopper rules its shrub with no predators to threaten its kingdom, its life is not without challenges. Yearly burning of the scrub land where it is found can leave the creature homeless and foodless.