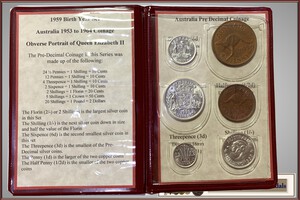 (which was not used in any official mint sets) and neatly displays each of the Australian coins of 1959.

Each of the selected coins are average to better than average in quality.

Within the wallet there are two information sheets on either side, the first detailing each of the aforementioned coins

and also various value conversions of Pre-decimal coins to their decimal counterparts.

The second details each of the displayed coins diameter and weight (see photos).

This set is a great birthday present for those born in 1959.